Gone but Not Forgotten: Technology’s Power to Revive Extinct Species

The majestic, behemoth woolly mammoth last walked the Earth some 4,000 years ago — and researchers say that they may do so again. Although the plotline will sound familiar to “Jurassic Park” fans, scientists are attempting to make it a reality. The methods and science are not yet proven, but the benefits to endangered or extinct species are as real as anything.

For the first time, emerging technologies including artificial intelligence (AI), data analysis and digital memory could help humans achieve a previously unimaginable feat: “de-extinction” or the raising of species from the dead. However, if this dream is ever to become a reality, scientists need smarter machines, more data, greater processing power, and additional time to pull it off. “This isn’t science fiction,” the acclaimed science writer Carl Zimmer says, “but a proposition.” Although not without controversy, de-extinction — also called resurrection biology — promises benefits to the world’s ecosystems.

How We Got Here

Climate change, human exploitation, habitat destruction and natural disasters are wreaking havoc on life forms. Although species come and go over time, studies show that species are dying off at a rate not seen since 60 million years ago, when the dinosaurs went extinct.

Under normal conditions, between one and five species dwindle to extinction every year. Recently, though, a study showed that pace accelerating, with several lost every day. As many as one million plant and animal species are in danger of extinction: by the year 2100, half of all Earth’s species could be gone. 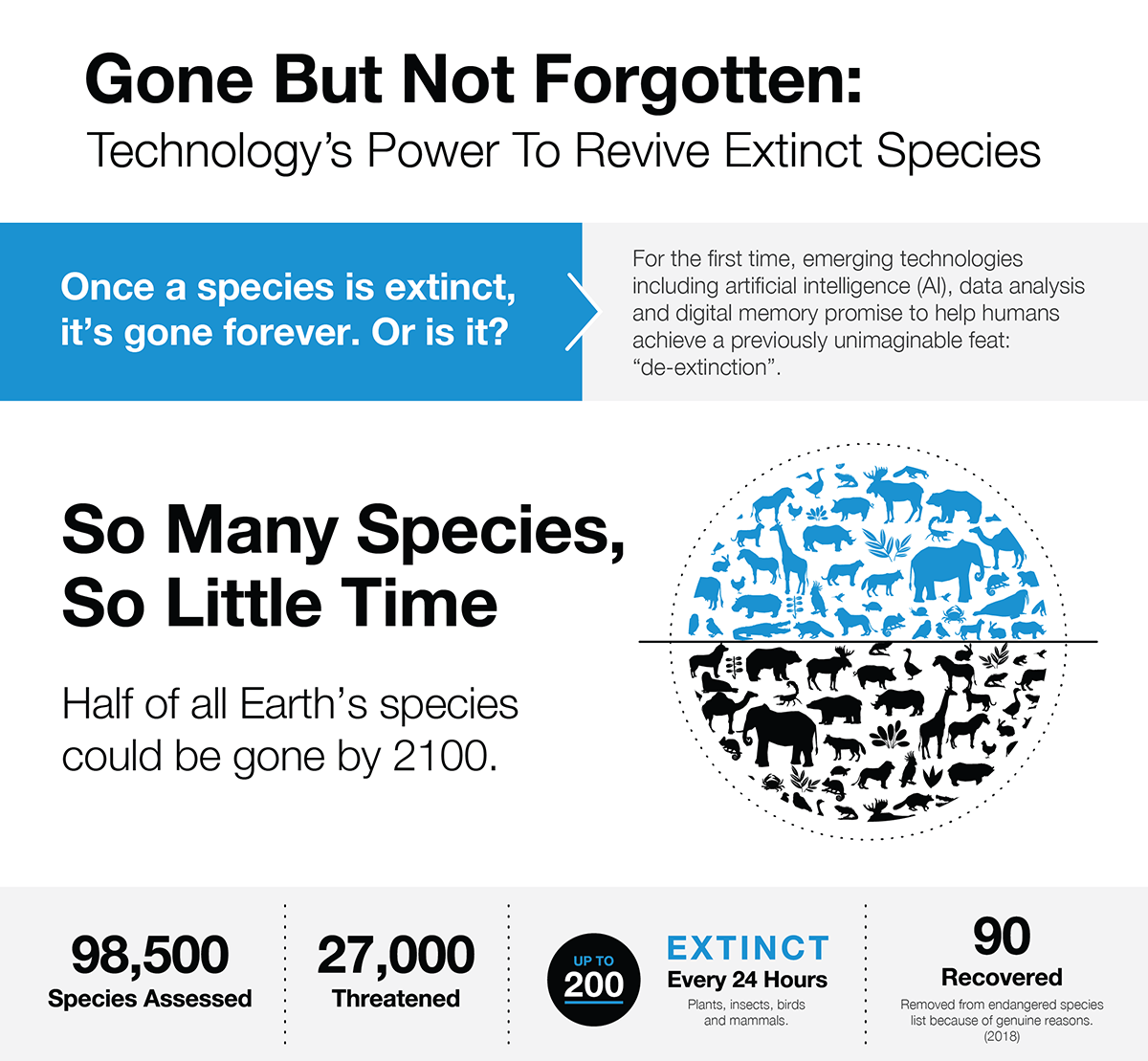 And while panda bears are cute and woolly mammoths wondrous, scientist argue that the reasons why biodiversity matters extend far beyond the emotional. Life forms on our planet are interconnected, supporting and sustaining one another, and extinctions can have a domino effect. When one species dies off, those that depend on it — usually for food — may die too.

So Many Species, So Little Time

Realizing the dangers, biologists have been working to preserve and even revive species since 1999 when scientists in Spain took genetic material from the last bucardo, or Pyrenean ibex. They froze the female’s cells and, in 2009, cloned them. But the ibex kid died shortly after birth.

A similar project is underway to save the black-footed ferret, says Bridget Baumgartner, manager of the Catalyst Science Fund, which funds research projects for Revive & Restore, the nonprofit “genetic rescue” organization leading the de-extinction charge.

With only a few black-footed ferrets remaining, inbreeding threatens the species’ existence. Working with DNA from the San Diego Zoo’s Frozen Zoo, which has cryogenically preserved genetic material from more than 1,000 different species, researchers hope to clone two deceased ferrets to breed with those in captivity, adding to the diversity of the gene pool. The success of this project would increase the black-footed ferret’s chances of survival while hopefully avoiding the pitfalls of the previous ibex project.

In the world of technology, 2009 was a long time ago. Advances is AI, database management, and processing and memory technology could help these efforts. Using AI-enabled genomic mapping, sophisticated gene-editing techniques and stem cell technology, researchers have created embryos of extinct species. So far, they’re using these embryos for research, but the goal for some is to resurrect certain extinct species — or a variation. Implant these embryos into the bodies or eggs of the nearest living relatives, the theory goes, and extinct species may live again, albeit in modified form.

Is T-Rex Coming to Your Neighborhood?

Those dreading the horrors of dinosaurs running amok can breathe easy: DNA has an expiration date. Even in the best conditions — consistent subfreezing temperatures like those in permafrost — it doesn’t last more than 1.5 million years. As already noted, dinosaurs went extinct about 60 million years ago; their remnants fossilized.

“Dinosaurs are off the table,” says Robert Lanza, professor at the Institute for Regenerative Medicine at Wake Forest University School of Medicine. “You can’t clone from stone.”

“Dinosaurs are off the table. You can’t clone from stone.”
Robert Lanza
Professor, Institute for Regenerative Medicine at Wake Forest University School of Medicine

However, there are many other candidates from which to choose. According to ornithologist Susan Haig, certain criteria help determine whether a species is viable for de-extinction:

Return of the Passenger Pigeon

The passenger, or “wild,” pigeon meets these criteria. With a population of 5 billion, it was formerly the most abundant bird in the world before being hunted literally to death, according to Stewart Brand, co-founder of Revive & Restore.

The passenger pigeon’s lone survivor, Martha, died in a zoo in 1914 — recently enough for genetic samples to be available today. But although researchers gathered tissue from the toe pads of stuffed birds on display in museums, they couldn’t completely sequence the genome. So they sequenced the DNA of the band-tailed pigeon, the passenger pigeon’s nearest relative, and compared the two to get a more complete picture.

Revive & Restore scientist Ben Novak envisions using the band-tailed pigeon as a surrogate for passenger pigeon eggs, whose hatchlings would be a composite of the two species. Eventually, offspring would more and more closely resemble the extinct species, although it would be, in effect, a unique breed. Novak aims to revive the species by 2025.

Will the Woolly Mammoth Roam Again?

Temperature matters much more to DNA preservation than how long a species’ remains lie dormant. DNA starts decomposing soon after death, but as mentioned above, consistently cold temperatures can dramatically slow or even halt the process. That’s why biologists were able to sequence the mammoth genome using genetic material from two specimens preserved in the Arctic — one some 4,300 years old and the other dating back 44,800 years.

The next step would be to use AI to copy and paste mammoth DNA into cell lines from the Asian elephant, the woolly mammoth’s closest kin. If those cells successfully replicate, researchers envision creating an artificial uterus for gestation — perhaps using 3D printing technologies, as was done with mouse pups — eliminating the need to use an endangered female elephant as surrogate.

Still, a variety of complications and ethical questions could arise from bringing back the woolly mammoth. Is this really bringing back an extinct species or creating a new one? What is the real value to the ecosystem by bringing it back? What if AI gets it wrong and fills in the missing DNA sequence with the wrong genetic code? Is it worth potentially harming another endangered animal to carry the revived animal as a surrogate mother? Some of the questions are a matter of philosophy, ethics and opinion; others can be answered with advances in technology.

Advancements in processing, memory and storage, and other technologies accelerate genomic sequencing.

Although de-extinction is still only a dream, scientists are pushing harder to realize it than ever before — in large part because of advances in technologies such as AI and data analytics, Baumgartner says. Sequencing genomes is a laborious and difficult task. Doing so with DNA from extinct species is even more challenging, especially if extinction happened before their genetic material could be frozen and stored in a controlled environment.

Woolly mammoth remains unearthed from the permafrost produced mere fragments of DNA that scientists had to piece together. And any organic material that touches a corpse leaves some of its DNA behind, mingling with the deceased animal’s genetic material. How can scientists tell which is which?

Fortunately, AI technologies already in use in such fields as personalized medicine can process enormous amounts of data to answer questions about a particular animal’s DNA, correctly sequence its base pairs, sift out those that don’t belong and fill in gaps. DNA sequences follow complex patterns, and one of the secrets to filling in the gaps of an extinct species’ DNA is to identify the patterns. These complex tasks might be impossible for a human to perform, but AI-enhanced computers are made for pattern recognition. They can rapidly analyze the incomplete data and fill in the missing pieces of the pattern, learning with each iteration to do the work faster and better than before.

DNA and RNA, however, aren’t flat. Soon, Baumgartner predicts, AI will be able to analyze and visualize genomic data in more than one dimension to provide “a more complete picture of what’s going on in the cell or in an animal,” she says. Multidimensional databases that can facilitate de-extinction efforts rely heavily on new memory innovations to work. These tools require creating in-memory databases with persistent memory technologies such as NVDIMM and 3D XPoint™ to move data closer to the processor and accelerate data analysis.

Although de-extinction is still only a dream, scientists are pushing harder to realize it than ever before — in large part because of advances in technologies such as AI and data analytics.

Micron Senior Business Development Manager Eric Booth says, “Rapid analysis of a multidimensional data set is much faster when the entire database lives in DRAM as an in-memory database, since the nature of accessing a multidimensional data set across arbitrary dimensions looks in many ways like random access to small chunks of data. DRAM is designed for this type of data access and very good at it. Relying on storage alone for this type of database is too slow, since storage devices are optimized for sequential access of large blocks of data. This is an application where persistent memory technology could be a very interesting option.”

Data compression, multidimensional databases and the ability to fit more and more information on a single computer chip will drive these technologies, Baumgartner predicts. Already, advances in memory have lowered DNA sequencing costs to make the science affordable where costs were once prohibitively high.

Still, Baumgartner admits, “There’s a lot we don’t know about the genome,” about sequencing and fully understanding it as well as about how the data of one organism interacts with that of others and with factors such as climate. “But I can promise you that, when we do figure it out,” she adds, “it’s going to be because of data analysis.”

We don’t claim to have answers to the logistical or ethical questions raised by de-extinction efforts or a strong opinion on whether this process should be pursued. But one thing is certain: The technology required to pull this off is fascinating and will require vast and fast memory and storage solutions if scientists hope to succeed!

To learn more about Revive & Restore, including how you can support its work, visit http://www.reviverestore.org.

Better data strategizing – and better hardware – will vault smart healthcare businesses ahead of competitors in the era of big data.
Read more ›

We Are What We Eat: AI and the Human Microbiome

We share our bodies with 100 trillion living organisms known as the microbiome. While this thought may make your skin crawl, the symbiotic relationship we share with these microbials may have a greater effect on our health and overall wellness than you may expect … for better or worse.
Read more ›

Learn how OHSU and Micron are working together to apply advanced technologies to cancer research.
Read more ›
+